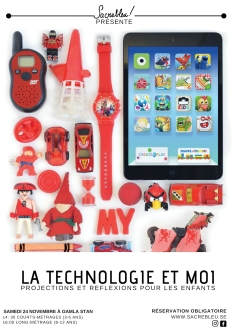 Sacrebleu proposes during an afternoon to reflect on the Technology and its place in our lives and that of the child through short-movies (From 3-5 years old) and the feature film: “Avril and the extraordinary world” of Christian Desmares , Franck Ekinci (from 8 years old).

This first screening aimed at children from 3 to 6 years puts Technology at the center of stories, a character in its own right. Extract:

Sometimes faithful friend, source of dream and escape sometimes vector of conflict, separation and detachment. Phone, application, smartphone, social networks, console, What are they to us? A new way of life? new habits? new playgrounds? . We are only sure of one thing: we do not know anything … or so little.

Recall, that the National Public Health Agency advocates a very limited use of screens on children under 4 years.

1941. The world is radically different from that described by the usual History. Napoleon V reigns over France, where, as everywhere on the globe, for 70 years, scientists disappear mysteriously, depriving humanity of technological inventions capital. Ignoring in particular radio, television, electricity, aviation, engine with explosion, this universe is locked up in an outdated technology, like asleep in a knowledge of the XIXth century, governed by the coal and the steam.